In this paper I aim to re-think the question of the world of persons with schizophrenia from the perspective of the German phenomenologist Max Scheler and that of the Japanese psychiatrist Bin Kimura. So far, no comparison between these two authors has been made, even though there are several convergences and evidence of Scheler’s indirect influence on Bin Kimura through Viktor von Weizsäcker.

In recent years, Dan Zahavi, Louis Sass, and Josef Parnas have interpreted the modus vivendi of schizophrenic patients in relation to a disturbance on the level of the “minimal self”. Subsequently, the discussion has highlighted the importance of disorders on the level of intercorporeality and intersubjectivity (Thomas Fuchs) and on the level of “existential feelings” (Matthew Ratcliffe).

This paper argues that Max Scheler and Bin Kimura allow us to focus on an aspect which has been neglected so far: that of a “relational self” that relates to the very foundation of intersubjectivity and intercorporeality and that can thus be reborn in the encounter with the other and may position itself differently in the world. In Scheler’s perspective, the world of persons with schizophrenia is the result of an axiological disorder (valueception) that impairs contact with the primordial life impulse (Lebensdrang). As a consequence, they are incapable of attuning emotionally and socially with others: this prevents the singularity from being reborn in the encounter with the other and forces them to position themselves in their own solipsistic universe. Moving in a similar direction, Bin Kimura interprets the world of persons with schizophrenia as the result of a disorder of aida (one of the central concepts of Japanese culture that indicates the space of being in between). The disorder of aida compromises the basic relationship (Grundverhältnis in the sense of Viktor von Weizsäcker) and hinders what Bin Kimura calls festum, i.e. the birth of subjectivity, so that it is experienced by persons with schizophrenia only as ante festum. Starting from these two perspectives, I argue the existence of an axiological and anthropogenetic dimension of psychopathology.

I begin with a discussion of Zahavi’s concept of minimal self and the thesis that reveals the disorders on this level of subjectivity as the origin of the world of persons with schizophrenia. I, then, analyze Max Scheler’s position and its historic importance for the emergence of phenomenological psychopathology. Thereafter, I introduce the concepts of “disorder of aida” (Bin Kimura) and “disorder of ordo amoris” (Max Scheler). Finally, I develop the concept of a “psychopathology of ordo amoris” by also comparing it with Ratcliffe's thesis of “existential feelings”. 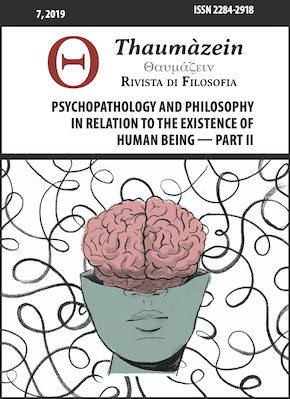