The aim of the article is to show the similarity between a thought experiment of the phenomenological philosopher Max Scheler (1874-1928), known as the “phenomenological
reduction”, and the psychopathology of schizophrenia. The “phenomenological reduction” envisages a human being whose access to reality and whose status as a living being have been grossly compromised. Such a being would be utterly transformed relative to a normal person: in its experience of the world – things and people would be “essentialized”, changeable, adynamic, interconnected, and yet rich in qualities; in its experience of itself – loss of sovereignty, yet resembling a creative God, whose thoughts are indistinguishable from the thing thought; and in its temporal and spatial moorings – frozen in time and space. The schizophrenic’s experience of their world, themselves and their temporo-spatial situation is then shown to be accurately predicted by the various consequences of the “phenomenological reduction”. The things around them and the people they encounter are devoid of individuality
and are more clones of some essence. They themselves are a “little God”, yet devoid of any sense of “myness” in anything they do or experience. Their world is frozen, changeable, interpenetrated by all sorts of entities, yet rich in qualities. 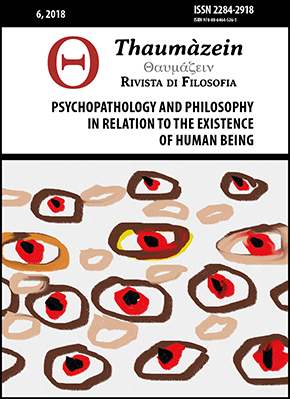 Vol. 6 (2018): PSYCHOPATHOLOGY AND PHILOSOPHY IN RELATION TO THE EXISTENCE OF HUMAN BEING